Pentti Heinonen Oy is a long-standing manufacturer of utility poles

Pentti Heinonen Oy has been manufacturing pine utility poles for decades. Over the years, our high level of professionalism has been passed down from father to son, now being in operation for three generations. Aate Heinonen founded a business focused on lumber in 1949, and the first distribution of pine poles was dispatched to England in 1952. Soon, poles became the staple of the company. The first time the baton was passed to the next generation was in the 1970s. As it was customary to have the company named after the owner, it was renamed Pentti Heinonen Oy, after its successor Pentti Heinonen. For over 60 years, our company has been long-standing in the exporting of wooden poles made from Finnish pine. Today, our business is focused on deliveries mainly to impregnation plants outside of Finland. A majority of our production goes directly to exporting, partly supplied through our partners here in Finland.

Our asset is experience, and this can be seen in the quality of our work. We manufacture our poles under strict quality standards and as requested by our customers. We also deal in timber procurement in the Savonlinna economic area. We purchase pine-dense felling areas for making poles and also pine from those who deal in felled timber. 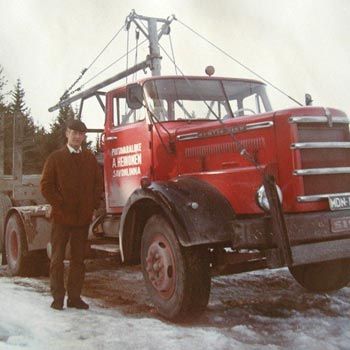